Steve Wheeler has raised the bar and taken the recent #blimage challenge (blogging about an image) and given myself, David Hopkins and Amy Burvall a video to blog a response to + find a video of our choice and pass on the challenge to three more people.

In recent years I've found the confidence to take on many a new challenge. These include giving keynotes at academic conferences to trekking 103km across the Sahara Desert to raise money for charity. Ask me a decade ago if I could do this and I would have said "Not a chance".


My immediate response to Steve's tweeted challenge was one of excitement. An opportunity to reflect and write. The tweet led to a blog post and a short video. I watched this and my reaction was totally unexpected....

I was taken back to my days at secondary school and then even earlier. This challenge had provided me with the stimulus to focus my thoughts and yet I was experiencing mixed emotions and these were coursing through me, taking me back and forth through various episodes in my life. The video was evoking memories I had not visited for a very long time. The elk that was left behind became me and took me back to two memories where I too felt abandoned. One is sports day and the other is being left handed. But first, if you have not already, watch the video.

This is where the video first took me back in time... The hurdle race

For reasons I've never understood, I have poor coordination skills - catching, throwing, kicking, jumping... I'm hopeless. Many a bruise I collected attempting to get over a hurdle never mind take part in a race. I felt the pain of the final elk. The one left behind. That was me on Sports Day. Never picked for the school team and although secretly relieved there was also a sense of rejection, not feeling good enough. Over the years I tried hard to find a sport I could participate in - at school it seemed that you had to have something to be part of a gang. I persevered taking tennis lessons, and even left handed golf coaching on the putting range. However despite patient teachers it wasn't to be. And there opens another issue - being a left hander...


In the late '60s we were taught to write with a fountain pen. Well we were taught to do write right handed... Anyone left-handed who has tried to use an ink pen will know that as soon as you write more than a word your palm has a habit of brushing over the writing and wet ink smudges... Smudges were not accepted. Many a play time was missed as I had to repeat a piece of writing.


Before you worry that I went through school traumatised, I can assure you I didn't. I found that non-competitive sports were far more enjoyable and went on to collect many certificates for swimming and live saving. The biro was a preferred writing tool (less smudging) and now I tend to note take using a pencil with attached rubber, as well as using a keyboard and storing notes electronically. In terms of practical activities I enjoyed art, and applied this creative side to the classes then called Home Economics or Domestic Science. I excelled at cooking and baking, creating handmade menus and glowed with pride when I was given the school prize at our Leavers Ceremony.

Reflecting on these aspects made me think of the Hare and the Tortoise. There is a tendency for many to think life is a race and if you are not in there first then you've lost the opportunity to shine. Yes we have to learn a range of skills but a) we don't have to excel at everything and b) some will take longer to develop. Key to this is giving learners a sense of self-belief to build confidence.


The Hare and the Tortoise - Aesop's Fables

A hare boasts to the other animals about how fast he can run. When none of them responds initially to his challenge for a race, he taunts them that they are too scared even to try. When tortoise speaks up and takes on the challenge, the hare scoffs that he won’t even waste his time racing the slowest creature in the world. Eventually though, he agrees to the race in a week's time.

The tortoise spends the week in training, but continues to move very slowly, and the other animals wonder if the race is a good idea. Nevertheless, there is a large crowd of animals on the day of the race.
The race begins and the hare roars off, while the tortoise plods along slow and steady. Deciding he is so far ahead the hare decides to have a sleep in the sun. However, when he wakes, the tortoise is nearing the finish line and takes an unlikely victory.

Helping our students find their way


Going back to the video, the elk that was left behind made it in the end. In the space of time it had taken him, the others had galloped across the next field and at first seemed out of sight, until you realise a small group were waiting. Peer support and encouragement is a vital part of our learning experience. My students don't always value the importance of group work until later on. There are frequent moans that someone in the group is not pulling their weight. Yes there are the 'free-loaders' but often when I question if they have spoken to the person to find out why, they have omitted to do this. I think as a tutor I also play a role in getting to the bottom of issues. Shyness is something that comes out time after time. Ice breaker activities to help the students get to know each other can help to break down perceived barriers. I'm going to re-visit this next semester and prioritise this.

So to conclude, thank you Steve. The video has taken my thinking on to new directions!


I would like to extend the challenge to anyone who wishes to respond. However following the rules set, here are the names of three people I nominate to give this fun and thought provoking activity a go!


And my chosen video.

Email ThisBlogThis!Share to TwitterShare to FacebookShare to Pinterest
Labels: #blideo 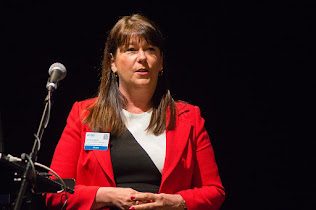 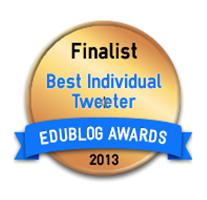